Home » Pondicherry tourism » You are reading » 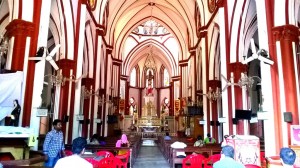 The very moment you step into the colourful and European like capital of Pondicherry, you can just sense the nostalgic remnants of historical French culture. The Sacred Heart of Jesus Church is just opposite to the railway station and its definitely one of the must- visit attractions in Pondicherry. It is lauded for its charming European architecture and style, bestowing a very auspicious feel to the city.

To those who love exploring historical monuments and have an interest in bygone eras, can start their Pondicherry Tourism with visiting Arikamedhu. This archaeological site is known for being one of the historical Indo- Roman trading centres. The Archaeological Survey of India has also excavated several Roman coins, paintings and other essential remnants in Arikamedhu.

This ten day festival basically takes place in the months of September- October. It is a holy cleansing festival dedicated to Lord Brahma. Apart from this, the religious devotees can also worship the Navgraha Temple which are dedicated to the nine different cosmic influencers of the Hindu Mythology. It is recommended to book a right Pondicherry Travel agent who lets you know about the origin, history and culture behind the practise of worshipping in Pondicherry so that you learn more.

For those who are trying to explore a new meaning of life and gain some kind of self realisation, Pondicherry Tourism is definitely one of the roads to walk on it. You must travel to Auroville, which is also known as a universal city in making. With more than 500,000 people from all around the world, this township is definitely one of the best attractions in Pondicherry.  It was established  on 28th February 1968. Currently, there are people from more than 30 different countries in this township.

People come and practise yoga, meditation, self healing, agriculture, architecture, pottery making, animal  husbandry and other practises here, in unity and harmony. The entire ideal be hind this singular experiment was to let human unity progress in this township. Tourists also come searching for spiritual salvation in the Sri Aurobindo Ashram which was founded in 1926 by the freedom fighter and poet Sri Aurobindo Ghose. It is known for its enriching intermingling of meditation and yoga which has a predominant effect on human sanity and peaceful experience.

So what are you waiting for? Pack your bags and gear on for Pondicherry tourism. Its definitely going to be one the most memorable trips in your lifetime.