Home » Bangalore Tourism » You are reading »

Bangalore as a major tourist attraction in Karnataka 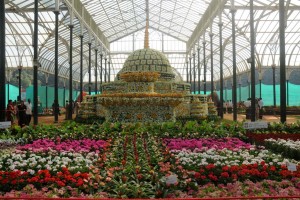 There are several places that come in my mind when Karnataka Tourism comes in my mind but perhaps the most important destination is Bangalore. Officially known as Bengaluru, it is indeed one of the top tourist destinations in Karnataka. It does not matter from where you come, this city has something to offer to everyone. The best and most interesting fact about tourist destinations in Bangalore is that they have a very special ambience and theme to their existence.

Our journey to explore Bangalore started with Lal Bagh, which as the name suggests, houses the most beautiful and rare flowers and trees. The flower show in Lal Bagh is definitely a delight. We were told that it was built by Hyder Ali, who is the ruler of Mysore but it was Tipu Sultan who played an important role in completing it. The rock present in Lal Bagh is assumed to be 3000 million years old. Then we moved towards exploring the cultural and spiritual side of Karnataka Tourism Packages, which led us towards the ISCKON Sri Radha Krishna Temple.

You might wonder what’s so special about this ISCKON temple? Well to start with, its the largest Isckon temple in the world. Spiritual learning and Vedic culture is promoted here. The temple is located on the Hare Krishna Hill. The gold plated flag post called as dwajastambha is one of the prime attractions of the temple. There are six holy shrines which are located in the ISCKON Temple.

For those who think that Bangalore has nothing historic and is just famous for being the ‘Silicon Valley‘ of India should go to Tipu Sultan Palace. Tipu Sultan used to call this palace as the ‘Rash-e-Jannat‘ which means the envy of the heaven. Now the museum has been converted into a museum and thus, makes it easier for the history lovers to explore the place along with its beauty. Then we headed towards the Aquarium Bangalore. Well, in case, you did not know about it, then you must. Believe it, the mulitude of marine species that are found here are definitely a delight to watch.

In fact, this aquarium which has been built in the shape of an octagon is the second biggest aquarium in India. Now you can imagine how massive it might be. It was in 1983 when the aquarium was inaugrated. The ornamental fish breeds will win anyone’s heart. In addition, they are also available in different colours. Now turning to little things and indigenous shopping exercises, you must go around the Brigade road once. It lies on the intersection of the Residency Road and the MG Road. Shop till you drop, actually turns true here. There are so many restaurants and shopping outlets that you will simply not know when the time flew by. So go ahead and explore Bangalore, after all it is the prime feature of Karnataka Tourism.

In the Bygone Era with Karnataka